Sakura (Japanese: サクラ) is one of the characters in Cooking Mama: Cook Off (known as Japanese Friend) and Cooking Mama: World Kitchen. She also appeared in Bento A Go-Go as a cameo with Clara and Kate.

Sakura has light tanned skin and rounded eyes with brunette hair framing her shoulders in a style reminiscent of a loose bob. Her straightened bangs have an intake at the center, and she has thin forelocks, with a cherry clip on the corner.

Normally she wears a pale pink collared top and a red pleat suspender skirt to match her socks and Mary-Janes. Her outfit resembles that of a grade-schooler. 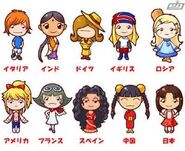 Sakura on the bottom right corner 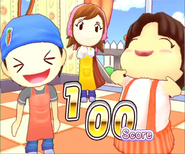 "I can become a sumo wrestler one day!
Add a photo to this gallery

Add a photo to this gallery
Retrieved from "https://cookingmama.fandom.com/wiki/Sakura?oldid=21073"
Community content is available under CC-BY-SA unless otherwise noted.