Papa is a character first introduced in Cooking Mama 2: Dinner with Friends, as a friend the player could cook for. He is the husband of Mama as well as father of Ringo and Ichigo. Papa has appeared in few games since then, including Gardening Mama and Camping Mama, where he mostly serves a purpose and gained a voice. He also had multiple cameos through Crafting Mama. Papa is voiced by Naoya Nosaka in the Japanese version and Lucas Schuneman in international versions.

Papa is a hard-working and kind father who enjoys camping as well as eating. He works as a businessman and doesn't seem to have as much free time as Mama.

Although Papa and Mama have a very loving relationship, he often teases her and hesitates when she asks him for help sometimes. They can also be fairly competitive towards each other, but he does not share her temperamental side.

Papa has fair skin with brown hair, the same color with bangs style of Mama's. He's the only family member to wear glasses, with his own being oval-shaped. Although Papa is depicted wearing a dark blue-gray work suit while carrying a suitcase, his casual attire consists of a white T-shirt beneath a pale green dungaree shirt, khaki pants, and light brown shoes. He is also the only family member who has a nose, likely to hold up his glasses.

For camping, Papa wears the same T-shirt with khaki shorts and a camping hat. Instead of wearing a dress shirt, he wears a light green down vest with brown shoulders. 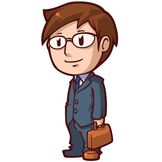 Never mind. You'll get it next time!