Ichigo is one of Papa and Mama's two children. She is Ringo's younger sister.

Ichigo first appeared as a cameo in Cooking Mama: Cook Off, and made her actual debut in Cooking Mama 3: Shop & Chop as a playable character in Let's Shop Mode, where she must retrieve items at the store. She is also playable in various minigames in later games, being one of the two playable characters in Camping Mama. Ichigo appears in Babysitting Mama to warn Mama about rain and other mishaps.

Ichigo has her family's facial features and skin tone, having the same brown hair like Mama, but with a few strands sticking out. Her bangs resemble Mama's and she has blushed cheeks. She wears a yellow long-sleeved shirt with a strawberry on the corner beneath a peach frilly apron, light denim pants, and white shoes.

In Camping Mama, Ichigo has hair in pigtails tied by strawberry hair clips. Her outfit consists of a rose-colored T-shirt with a strawberry print in the middle beneath a sleeveless yellow jacket, denim skirt with black leggings, short white socks, and rose shoes. Rose wristbands are worn around both of her hands.

A young and innocent little girl, Ichigo is curious and eager to help, sharing her mother's passionate nature. She gives everything her best, but becomes sad and disappointed in contrast to Mama's anger or annoyance when something bad happens. Ichigo is shown to be clumsy sometimes, but also creative. Like Mama and Papa, she can become competitive with Ringo. 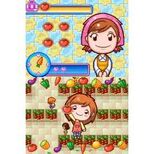 Ichigo has flipped her first pancake!

Ichigo in her warming spot

Community content is available under CC-BY-SA unless otherwise noted.
Advertisement